“I nostri colori splenderanno per sempre Alè Udinese” is what's stitched into my scarf (the one that hangs above my bed, or, during games, is wrapped around my mouth to prevent me from hyperventilating). And that's true, until Braga hit the equalizer and the shine became a little duller; I was left with the now all-too-familiar sinking feeling: we are going to lose this.

That "now all-too-familiar feeling” would be TFC's fault. You see, I was at work during the game (don't worry, I took the second leg off), and I had to rely on the kindness of strangers (and not-so-strangers) for game updates (editors note: thank you and I am sorry for anything I may have said, especially to someone specific who I may have threatened to, ahem, "punch in the face, regardless of the score"). However, I had to leave work at 16h30 to meet my brother (the other brother, the non-soccer one, who actually ended up watching the TFC game with me) for dinner and wasn’t sure if I would be able to have reception (as I was on the subway) for the end of the game. This is where that, "now all-too-familiar feeling" comes in, because as soon as the 80' hit, I naturally assume that we're done, we've lost it. It's like some weird, I-missed-the-point-of-the-story, Cinderella syndrome: the scoreboard hits 80:00 and the other team will certainly score.

Of course, I am writing this while on the subway, pre-TFC; let's see if I'll have to make an amendment. Or, an apology. [Post Game Editor’s Note: Well, they didn’t lose it the last 10! And that’s all I will say about that]

The point being, my beautiful readers (especially you, did you get a haircut? It looks great, really suits you!), the score remained a 1 - 1 draw, with an away goal for us. Don't get me wrong, I'm not happy (though, to be fair, I wouldn't be happy if they won either), but it's actually the best case scenario (again, I would not have been happy with a win). I have to check highlights to see if The New Samir is really worthy of that title (Though, this!:)

Anyway, I'm almost excited to see them play on Saturday in Serie A. By the way, RAI now has the rights for games: http://www.gazzetta.it/notizie-ultima-ora/Calcio/italiani-all-estero-avranno-Serie/22-08-2012/2-A_002626059.shtml and, as always, check out @CanadaSoccerTV on Twitter and Football on Canadian TV online for all game schedules and channels). I'm not sure how long this feeling of euphoria will last ("I'm *almost* excited to see them play" is about as euphoric as I get), but, I have hope... Well, at least not utter disappointment.

Anyway, on to TFC tonight. Whoever has "first day of CLQ" in the "Guess when Sonja Gets An Ulcer" pool may still win. We can still make playoffs, right?

Post script: to everyone who came to my rescue this weekend, thank you. I didn't mean to worry anyone (as I kept saying, "I wasn't emotionally upset, I was logistically upset;" don't worry lesson learned: cowards hurt the most... logistically), but thank you for stepping up. Thanks for: white cushions and the green box (and dropping in, I'm sorry I missed you), allowing me to order a steak... extra blue (even if I didn't end up doing so), a ferris wheel ride (and a disposable flashback), gin martinis, despite it being nothing but straight gin and a lemon wedge on the side (though, come to think about it, that's probably the best martini, ever!) and the contents of the photo below (even if, at the time, no one actually knew I was upset): 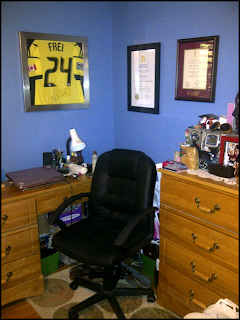