On the evening of June the 6th, I was having a conversation with the decent and likable Jerrad Peters. I was telling him that, despite the 5 – 0 loss to NYRB, Toronto didn’t actually look bad as a team. In fact, I was alright with the loss, because despite Harden’s uh “contributions” the team played well—almost good!—and I was happy with their improvement.

I was immediately interrupted and called delusional.

Now, Peters has called me many things in the past, and most of them have been justifiable, but I am not entirely sold on “delusional” (and, what does he know about soccer anyway?) However, in a split second of insanity, I started to question if he was right.

Was TFC worth it? The pain, the anguish, the letdown? The rage? Why was I doing this to myself? Why was I allowing myself to get gutted—and made fun of—for a team that was giving me nothing in return on the pitch. Sure, I’ve had great experiences and have met fantastic people through the team, but was it worth it to continue to be a fan? Could I not just become a casual observer?

The answer is no. Not even close.

After I hung up the phone and while mulling over a "causal fan statues," Tender by Blur came on random on iTunes. For those of you unfamiliar with the song (we can’t be friends) you can check it out here.

Now, I know everyone is loving the Depeche Mode kick, but to me, Tender’s chorus is what is going to get me through the rest of season. And the next. And the one after that. And after that:

Alright, it’s not quite what Mr. Albarn may have originally meant, but I will take it.

And “that feeling” that I am waiting to come? It’s not a win, or a title, or even for the rest of Toronto to love TFC like I do. "That feeling" is about when the club feels about themselves the same way that I do: complete and pure faith and trust within themselves.

Plus, I once saw Stefan Frei at a Gorillaz show. Not quite Blur, but it has to be some sort of a sign, right? 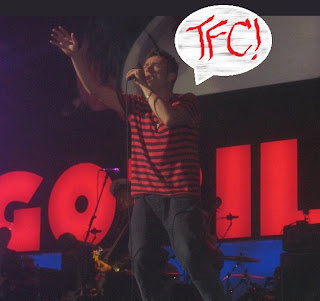 (Taken at that Gorillaz show. AND YES I WAS TOO SHY TO SPEAK TO HIM (Frei, not Albarn), AND NO ONE WILL LET ME LIVE IT DOWN!)

Post script: Peters is all talk, I know he's totally Toronto 'Til I Die.
Posted by Sonja Cori Missio at 20:52