Alright, let's get this started. We all waited four years, so let's do this up right. Most of my stat information for the next month will be (lovingly) stolen from www.livescore.com, who I suggest you check out because they have completely changed their interface for the World Cup, and, despite the awful green colour, it's awesome.
Did I just write “interface?” Damn you MLIS!
Anyway, let's start with Day One. Here's the line up:
GAME 1
South Africa – Mexico
Ref: Ravshan Irmatov (Uzbekistan)
South Africa
Coach: Carlos Alberto Parreira 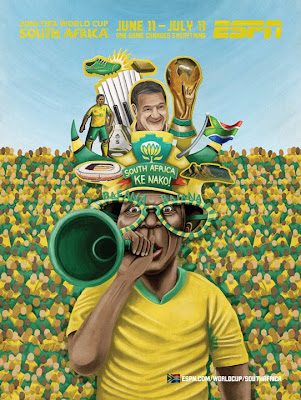 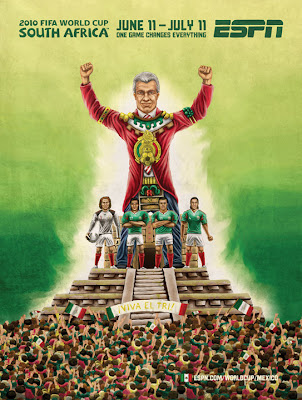 Oscar Perez
Paul Aguilar
Francisco Rodriguez
Ricardo Osorio
Carlos Salcido
Gerardo Torrado
Rafael Marquez
Efrain Juarez
Giovani dos Santos
Javier Hernandez
Carlos Vela
Prediction: I want to say South Africa will win this match, but in reality, I don't think it's going to happen. It's the first game so I am sure they will be some jitters on both sides, but I think Mexico will prevail in the end. However, I also won't be completely surprised if it ends up being a draw.
Predicted Score: 0 – 1
GAME 2
Uruguay – France
Ref: Yuichi Nishimura (Japan)
Uruguay
Coach: Oscar Tabarez 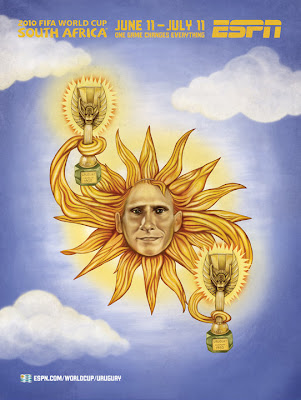 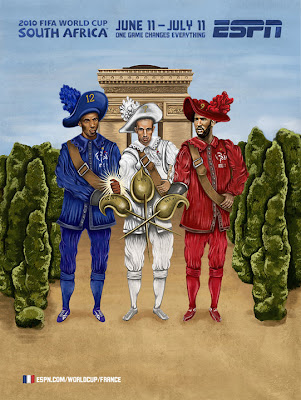 Prediction: I hate to admit it, but the damn Frogs will get this one. That said though, I think Uruguay (or, Team Diego) may give them a good run for it. The French need to prove themselves for being there and they will use their first game to do so. But more importantly, I am watching to check out how Domenech 's glasses will be styled this year.
Fun Fact: The French tied 0-0 with Switzerland in Germany 06. The French then went on to lose to Italy. Conclusion: The Swiss have a chance to win SA10.
Predicted Score: 1 – 2.
ONE MORE SLEEP. I'll be at the Grad Club at 09h30. With the biggest smile on my face that you've ever seen.
Hopp,
scm.
Posted by Sonja Cori Missio at 19:40