Yesterday, I decided to stop reading Perez Hilton (before you judge, keep in mind I do have an MA in Popular Culture, it's totally research!), because of a post and a comment.

Oh pu-leeease, Lily Allen, do you expect anyone to believe that you are that into sports?! 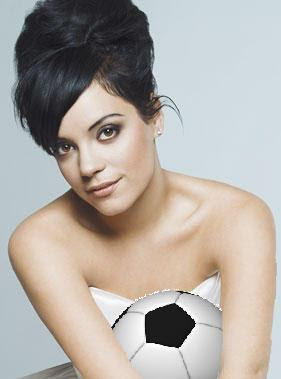 The 'singer' apparently flew into Hamburg to see the Fulham FC take on the Atletico Madrid in the UEFA Europa League Final, and as per usual, she must have gotten waaaaaasted during the match.

Check out these shots of her sobbing out all of the vodka she surely ingested after her team lost!

We bet the players couldn't concentrate with the RANK smell of booze and despair seeping off of her in the crowd!

Wow. My team blew their contention for the Stanley Cup last night. I was really bummed. I pretty much said shook my head felt bad for a while then got over it. I mean, no one was dead or anything. Lilly needs to check herself for real.

And that pretty much sums up everything about North American feelings towards soccer, and sports in general.

You're dead to me Perez.