Well tomorrow is the biggest day (so far) in the world of soccer. Or, ever, according to Jose:
"This game is the most important in the world. It is even bigger than the World Cup because the teams in it are at a higher level than national teams, who can't buy the best players." - Jose.
Needless to say, I am very excited for Saturday. However, I see this as a match between van Gaal and Jose, more so than a match between Bayern and Inter. I hope there is fistycuffs at one point.
Tonight I will stock up on chips, dip and veg and have a sleepless night waiting in anticipation for tomorrow. But what am I doing in the meantime? Well for starters, I finalized my fantasy team. Like usual, my pride and honour won out over common sense and the likelihood of winning. Currently my team looks like this: 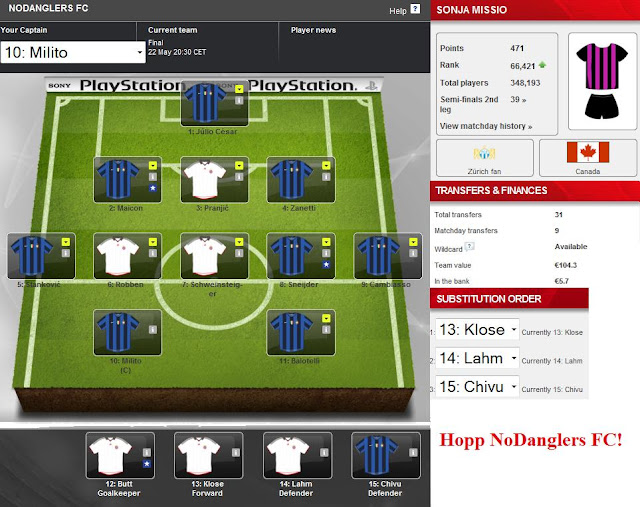 Let's see how the NoDanglers FC will do overall, personally I think they stand a good chance.
Anyway, I have also been doing something MLIS (Masters of Library Information Science, my current degree. That's right, I am a scientist) related. While we're all waiting for the game to begin, I thought I would share some CL-themed links with you to enjoy in the meantime So, in the spirit of library science, I have made a...
Champions League Article (Poorly Done) Pathfinder:
BBC:
"What makes Mourinho tick?"
http://news.bbc.co.uk/sport2/hi/football/europe/8693118.stm
Dedicated to learning Jose's methods. Spoiler: It's God.
"Battle of the Bernabeu"
http://news.bbc.co.uk/sport2/hi/football/europe/8695530.stm
Listen to the embedded audio clip called “Mourinho- What Makes Me Special.” Spoiler: It's God.
Soccernet:
"Soccernet Preview: Champions League final"
http://soccernet.espn.go.com/columns/story?id=788939&sec=england&root=england&cc=5901
A little melodramatic (IE. “Jose Mourinho: The student will face the teacher”), but alright overall. Good history sum up and sidestats. Plus a picture of Ribs' red card. Thumbs up!
"Van Gaal's Special relationship"
http://soccernet.espn.go.com/columns/story?id=788823&sec=uefachampionsleague&root=uefachampionsleague&cc=5901
How van Gaal and Jose became BFFs. Thanks Bobby Robson! Err... Sir Bobby Robson.
From UEFA
"Zanetti's Inter team guide"
http://www.uefa.com/uefachampionsleague/news/newsid=1489287.html
Zreamy Zanetti (that works better if you say it outloud) give his thoughts on the match. In video form! So you don't have to read!
"Robben's Bayern team guide"
http://www.uefa.com/uefachampionsleague/news/newsid=1489290.html
Robben does the same. Copycat.
"Match facts: Bayern v Inter"
http://www.uefa.com/uefachampionsleague/news/newsid=1482921.html#match+facts+bayern+inter
This one requires reading. Spoiler: Inter will win.
Hopp,
scm.
Posted by Sonja Cori Missio at 14:41