WAGs (an extension of Stevie G.) 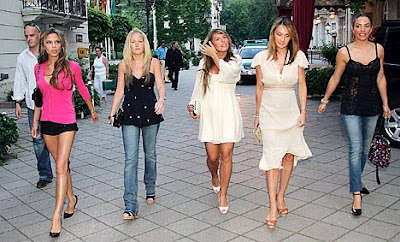 When I first typed in “Steven Gerrard” into Google to find a picture of him for this post, the Google let-me-guess-what-you-want-to-search-for-thing’s first suggestion was Steven Gerrard’s wife. So I am going to take this opportunity for a quick discussion on WAGs, and then post about Stevie G. after.

I recently had a (twitter) conversation with former TFC-er Rohan Ricketts about WAGs. It went a little something like this:

@rohanricketts -
are the same as Wayne Rooney's Mrs and Beckhams wife have carved out their own careers. Those to should not be in the WAGS bracket.
5:31 AM Apr 23rd via web

@rohanricketts-
@SonjaMissio How does it undermine what I said? I said that they were different from most of the others as they have their own career path?
about 22 hours ago via web

@SonjaMissio-
@rohanricketts by using "Mrs." and "wife" instead of Coleen and Victoria. They are their own people, not extensions of their husbands.
about 21 hours ago via web

It WAS a good point! Anyway, I’ll be honest: it is my goal in life to become a WAG and I’m pretty sure that I’d make an excellent one. I am fascinated by them; I honestly think WAG-ism is the ideal post modern feminism, with Vicki B. being the pinnacle example of a post modern feminist. The only reason why I was disappointed that England didn’t make Euro08 was for lack of WAG news and the only reason why I’m excited that England made the WC10 is for the overwhelming WAG news.

Don’t get me wrong, I don’t care about their hair, nails, or outfits (Side Note: I am trying out the Oxford Comma, despite hating it with a passion), I just find the whole culture of WAG-ism amazing. Now, I’ve written academically about subculture theory being applied to hooliganism, but I am seriously considering looking at the subculture of WAG-ism next. Seriously, has any other form of popular culture celebritism made the wives of celebrity as “important” as they do with WAGs? Why are we (and it’s not just me, look at the Mirror, the Sun, the Daily Mail etc.) so intrigued by them?

I dunno. I just thought I’d throw that out there.

Gerrard next, I promise.