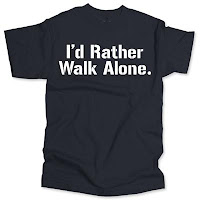 I’ll be honest, I don’t really care for Liverpool. I don’t like them, but I don’t dislike them. They’re kind of a non-entity on my watching soccer radar. However, I have written about them a lot: in my latest essay [Sym-ball-ism: How Soccer Matches Became the New Catholic Masses], I discuss “You’ll Never Walk Alone” in context of its original Broadway use to how it’s now more comparable to the poem Footprints in the Sand. And I also discuss the Hillsborough Disaster in another essay [A Working Class Hooligan (Is Something to Be)], but not nearly in as much detail as I want to. However, other than that, Liverpool remains neutral to me.

Which is weird—and leads me to—Gerrard. Gerrard is everything I think a player should be: he is true to his team (playing for Liverpool since 1998, and their youth team since 1987), he’s a hard worker who has proven himself over time (rather than a quick rise to fame), according to http://www.stevengerrard.net, Zidane is quoted as saying, “is he the best in the world? He might not get the attention of Messi and Ronaldo but yes, I think he might be.” (http://www.stevengerrard.net/tag/zinedine-zidane/) and Gerrard seems like all around, good guy (especially “stepping down” to Torres’ arrival). I know he was changed for assault, or battery, or causing bodily harm, or whatever, and I know he ran over a kid once (or something, this whole blog is totally libelous), but I don’t think someone’s personal life should determine how I feel about them as a player (hear that, JT?) I am more offended that he scored an International goal against Switzerland, to be perfectly honest. In other words, Stevie G. is alright by me.

So why don’t I care for Liverpool?

I don’t know, I never really cared for how they played, nor do they hold a threat (especially this season) to Chelsea, CL or UEFA (ugh, FINE, Europa). Maybe I’ll start watching them for the helluva it, to find out what I’ve been missing. I mean I do like Rafa on Special1 TV.

Alright, sixstud, I am going to spend the rest of the month watching Liverpool and make a fuller report then. But only if you answer me this: what the hell is a Scouser?