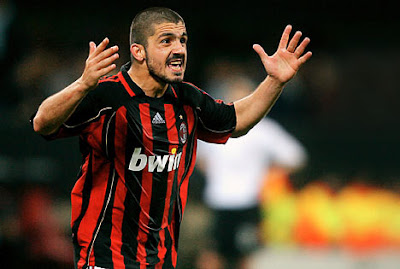 Creating my fantasy teams stress me out more than actual games do. I think it’s because they give me too much control and fuck with my loyalty. For instance, do I make a team that I know will do well or do I make a team based on who I like?

I mean, some decisions are pretty easy, for instance I wish I could have Gattuso, but I know he gets too many cards to make him worth it. Same with Drogba. What kills me though, are players and positions that it could go either way, for instance choosing a keeper. I feel like I have to have to pick Cech, even though he’s not the best and he uses up my Chelsea quote. But, if I pick, say, van der Sar, does that mean that I don’t want anyone to score on ManU? That doesn’t seem like the right choice, either.

Then there’s also the part of me who dislikes certain players and just plain don’t want them on my team *coughMesicough* I know, I know, he’s the greatest, he’s phenomenal, he walks on water; I still don’t want my team (NoDanglers FC, by the way) to be associated with him. This year however, I have given up and he’s my captain (at one point earning me 38 points!) So should I be upset or happy that he did nothing in the last CL game? [Answer: I hope his performance is the exact same for Wednesday’s game].

It also kills me to put a Dutchmen, a Frenchmen or a Barcamen *coughMesicough* on my team.

So, it’s either common sense, practicality and good soccer managing over pride, glory and atheistic. It’s a losing battle.

Post script: this is also why Football Manager will slowly ruin my life.
Posted by Sonja Cori Missio at 19:07