Before I start off, I just want to say, when I like something, I enjoy promoting the hell out of it. For example, check out these two awesome sites: http://footballtvcanada.blogspot.com/ and http://www.eastsidestandup.com/ ! Anyway, I with that in mind, I would like to take this opportunity to tell you about two decent stores (within skipping distance from each other) that I will now frequent for all my future soccer purchases: Toronto Sports Shop  and Sports Centre (both north of Elm on Yonge). They’re almost as good as Soccer Fanatic (on Cork in Guelph); I’d highly recommend. (Though, a few weeks ago, a guy in Sports Centre asked if I was a Napoli fan…)
Alright, now that that’s out of the way, let’s start. As you may know for about a month or so, I have been on a hunt for a CMNT jersey. Originally, I had planned to buy a Women’s shirt (as in size, not CWNT), but quickly gave up on that search. Then I tried for a Boys’, but had to give up on that too. In fact, over the last two weeks, I have been just trying to find a shirt that isn’t an XL. Because this is what XL looks like on me: 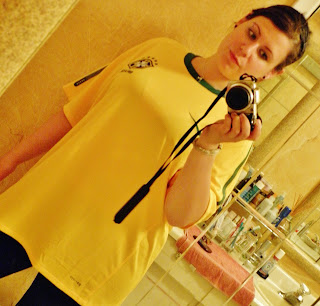 Pretty! And an extra 30lbs.
I mean I can maybe get away with it because it’s yellow, but a CMNT shirt that big would just look like a poorly fitted tennis dress. No thanks. (Also, Peters, weren’t you suppose to get the Brazilian shirt from me?)
People have been suggesting stores to me left and right, but either they are too far for me to get to or they only have the dreaded XL. Even the fine folks at Umbro have been trying to help me out (thanks for that). To make a long (and tiring, and heartbreaking) story short, this is what ended up happening: 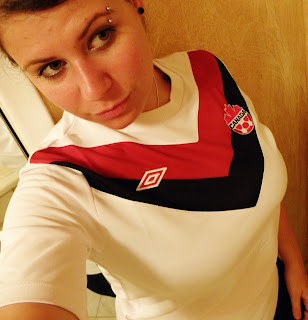 So yes, I paid more, for a shirt I didn’t actually want (I had hoped for a home), in my second choice size. And the crazy part? I’m still really happy I got it. How’s that for messed up?!
Well, not really. Let me explain.
Have you seen the advertisements for the qualifiers? They look a little like this: 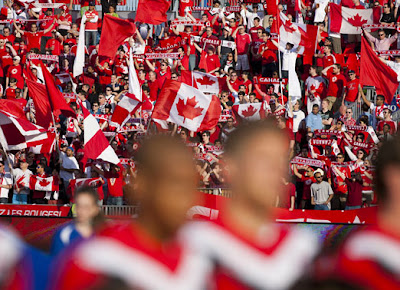 Unfocused on the team, crystal clear on the fans. Because let’s face it, that’s what these games come down to. This is not a dig at the CMNT, but rather, the fans are being asked to bring it just as much as the players. I would actually feel guilt for not showing up in a jersey, as much as a striker would feel for not showing up in his boots (OH SHUTUP AND JUST GO WITH IT).
Could it be, that I am actually beginning to truly support local soccer? That my nationalism is starting to come through? That I may say “Canada” the next time someone asks, “where are you from?”
Or, could I just be adding to my every growing jersey collection?
Who knows! But I’ll see you Friday.
Hopp,
scm.
Post script: WOULD IT KILL SOMEONE TO MAKE A SOCCER SHIRT WITH A BIT OF A SCOOP NECK?!
Posted by Sonja Cori Missio at 22:36