I had a revelation in the shower this morning. There I was, singing TPOH’s “I’m an Adult Now” into a shampoo bottle, and it hit me: why I have taking such a liking in the idea of the LBD.
Now, there is a background story to this. The whole idea of a TFC LBD started on Twitter (where else?) because of @TFCRegina. I was trying to rationalize if I could wear a TFC shirt to a formal function and Lars came up with a solution. The conversation went as follows:
(all from @TFCRegina)
TFC shirts are always acceptable. If you wear for a business function it says "I can make money but I'm also a sucker for bad deals." If it's for a date, "I can make money but I’ll be faithful forever." If it's for casual wear "Just came from the game" Fact: The TFC shirt is the new little black dress.
So, to me, TFC became forever linked to the LBD. Which resulted in a series of these: 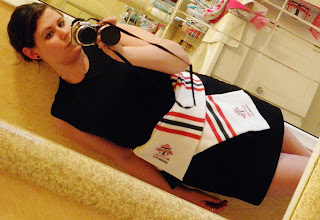 However, I am not sure if it’s TFC and LBD that I like, but rather, it’s ME and LBD that I like. Now hold on, I realize how arrogant that sounds (so?) but hear me out. The TFC shirt is not the new LBD, rather the LBD is the new me. Or, old me. Just me.
According to Urban Dictionary, the definition of LBD is:
A term used to define a little black dress which most woman possess. The dress is most likely overworn but always seems appealing especially when added with accessories such as bangles and clutch purse.
While I don’t really agree with the bangles bit, the LBD is a staple in most women’s wardrobes. For me, it’s about 73% of my overall wardrobe. However, it’s such a stable because it’s so malleable. You can dress it up (with bangles, apparently) or dress it down. It can be for sexy, or somber, appropriate or inappropriate, work-wear or soccer-wear.
Which brings me to my point.
I support four teams (and that’s just at club level). BSC Young Boys due to blood, Udinese Calcio due to heritage, Toronto FC due to pride, and Chelsea FC due to boredom.  In other words, I’m the LBD and the teams are the accessories. Basically: I’m boring and plain; it takes the team—whether it be YBs, Udi, TFC, or CFC— to dress me up for the world. I have nothing to do with my own fandomism; rather, my whole existence of “being a fan” depends on the team of the day. An LBD can’t actually exist on its own; on its own, it’s just a little black dress (compared to the all-powerful LBD). I, on my own, do not exist as a fan, rather, I need the scarf around my neck (metaphorically) to be the identifier, the signifier, and the accessory.
Or something.
Anyway, that’s why I find it difficult whenever anyone asks me, “so, who do you support?”
Hopp,
scm.
Post script: this all makes PERFECT sense in my head, by the way. You have to read it with lots of hand gestures and flailing.
Post post script: Just guitars screaming, screaming, screaming/Some guy screaming in a leather jacket/Woooooooooooooah!
Posted by Sonja Cori Missio at 14:47