Please tell me SOMEBODY got the title reference. Anybody?
I’m excited for the game on Saturday. Not just because, you know, I’m excited for every TFC game, but Saturday is special. Why? Couple of reasons:
First, because I won’t be showing up straight from work. You see friends, normally I come straight from work, which means I change out of my Cuddy-inspired-hospital-wear (mostly Calvin Klein dresses) into a shirt, tights, and a skirt or shorts. I pile my hair up behind a band (it’s windy at BMO!) and I wrap myself up in a scarf (once in a Canadian flag!)  and I head South East from North York General Hospital (Plug!: www.nyghfoundation.ca) and head towards “Our House.” Now, there’s nothing wrong with that; it’s no secret that I love my job and I have to go that’a’way anyway to get home, but changing from “work clothes” to “play clothes” gets me thinking:
Why hasn’t anyone created the TFC/LBD? Seriously. That perfect outfit from NYGH to BMO (it’s a small market), and I wouldn’t have to carry 30lbs of gear to work with me. Well folks, I just happened to be in a LB D tonight and I experimented.
Turns out, there’s good reason why no one (sane) has invented the TFC/LDB yet, because it looks a little like this: 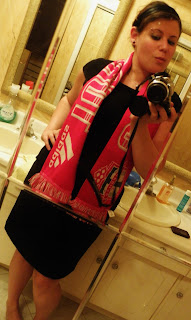 Now, I should point out that I can't design. Or sew. Or think rationally So my idea was to take an LBD and work a scarf somehow into it. Ahem: 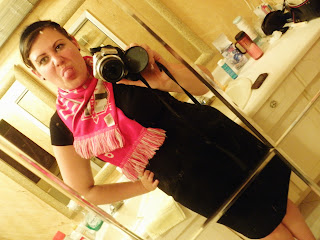 Fail.
Anyway, I am excited for Saturday because I can wake up and get right into TFC gear. No clothing changeover for me! Now, this may not seem like a big deal to you guys, but trust me, it is to me.
The second reason why I’m excited for Saturday’s game is because I am going with Nikolas Spohr. In a previous post, I mention how most of my ultra-in-a-skirt behaviour should be credited to Nik, and that remains true. So, if you see us on Saturday, come over and say hi. Also, as mentioned before, he’s running for NDP MPP for the Halton Region, so if you have a question, or just general political talk, I’m sure he’s glad to discuss at the half or post-game. He also likes BVB, so he’s happy to talk about that too. AND, ALSO I DIDN’T HAVE TO BRIBE HIM TO GO WITH ME.
So, until Saturday…
Hopp,
scm.
Post Script: Man, I wish it had worked… 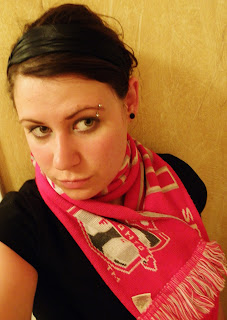 Ultra in a dress.
Posted by Sonja Cori Missio at 00:06