I just deleted a huge portion of this post, mainly because most of it made no sense and/or was grossly grammatically incorrect (like this sentence). But, now I have calm down and don’t feel the need to have every other word as a swear.

Ha! Word doesn’t recognize “a swear” as being a grammatically correct word order.

Anyway, yesterday’s TFC game was a mess. Sure, the reffing was unfair and one sided and card’y. And sure, the game was weird in general. But, to be perfectly fair, for the most part, TFC did play like shit. Just sayin’. However, while everyone is whining and bitching about that, no one is mentioning the Defoe handball this afternoon. Not even Forrest and Dobson made a comment. Come on guys, I expect that of Mitch Peacock, not of you (oh! Burn!). My, um, trusted, Soccernet did have this to say about the ignored scandal though (the bolding is a gift from me):

But Spurs' claim to what will be a £20million-plus cash bonanza was not achieved without controversy on a night of torrential rain at an electric White Hart Lane.
Jermain Defoe, set to undergo a groin operation, blatantly controlled the ball with his arm to score the second goal that all but killed the contest.
There were echoes of Thierry Henry's scandalous handball that saw France reach the World Cup at the expense of the Republic of Ireland.
But Tottenham fans will rightly point out their side were already ahead in the tie on away goals thanks to Peter Crouch, who went on to complete a hat-trick, while it could have been much, much worse for the hapless visitors, who had Senad Lulic sent off.

Right, let’s look at the bolds, shall we?

1.      Groin operation? Maybe he should get his arm check out too. The ball may have bruised it when he RAMMED HIS FUCKING ARM INTO IT.
(ahem...)
2.      Blatantly is correct. Maradona would be proud.
3.      I will discuss this in a few minutes in more detail (hold on to your hats! [originally that said “hold on to your balls” in reference to Defoe’s handball, but it didn’t  come out quite like I wanted it to]).
4.      English fans can go fuck themselves (I am assuming most Spurs fans are English, except for Jason). Let’s apply the same sentence to another incident and see if the fans have the same rationale: “But [German] fans will rightly point out their side were already ahead [because of ONE goal as well] thanks to Klose. What I am trying to say is this: I don’t think that they had quite the same reaction as “oh well, forget about the bad reffing because we would have lost anyway” as YBs apparently should have, when it came to the Germany – England game in the WC (re: Lamp’s disallowed goal).

In short, think of it this way (to go back to an earlier point): Henry’s handball? Everyone is up in arms. A small Swiss team gets fucked over? No one gives a shit. 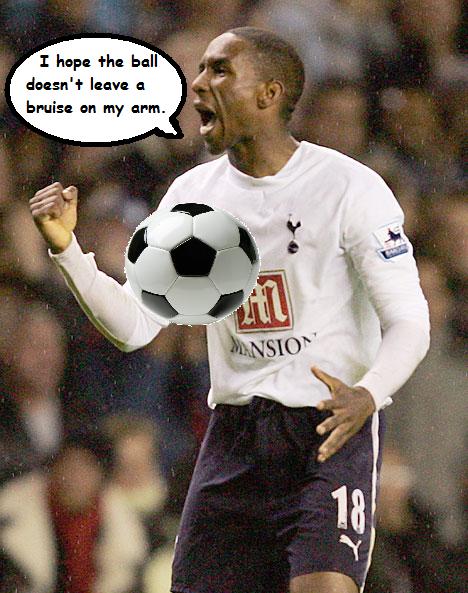 Let’s analyze this further and discuss the  bigger issue here; it’s more than just YBs being cheated out of CL because Crouch is one gross looking man (actually, Crouch’s goals were alright, I just don’t like the man). Rather, let’s look at how soccer is growing increasingly shitty to watch. Big teams are entitled to, rage, glory, un-justice-ment, validation etc. while small teams appear to be no more than nuisances that get into their way on their roads to title-ship. Let me explain; how can smaller teams compete with A. the amount of money big clubs can throw at players and B. the amount of leeway given to those teams just because who they are. Now, the money issue is a biggie; teams like Barca, Juve, Chelsea etc. have no problem throwing money around for whoever they want. My dad, uncle, and Jason were having a discussion today about how the concept of “debt” doesn’t really exist to big teams; they can afford to buy who they want, when they want. And honestly, who is going to turn down millions to stay loyal to a small team?

However, soccer becomes un-fun when the top EPL teams start winning 6 – 0 on a regular bases (yes, even—no, especially—Chelsea). The Special One recently said:

“This game [the 2010 Champions League Final] is the most important in the world. It is even bigger than the World Cup because the teams in it are at a higher level than national teams, who can’t buy the best players.”

Well, you may argue that that’s what CL is for, separating the boys from the men. Fine, but is the road to CL really the best assessment of the best teams? The same countries get (most of the time) the same number of guaranteed spots (England, Italy, Spain), where as other teams from smaller countries fight in qualifications against teams from the set-qualifying countries! And I use the term “teams” loosely; those who qualify are slowly become groups of people, wearing the same coloured shirts, who do their own thing of the pitch.  How often do you hear someone say, “Inter/United/Real is a fantastic team!” without them listing individual players and their individual skills as oppose to what the team does as a whole.

Now, I get that good players are essential to a team and I get that you may think that  my argument is pretty shaky. But I am just tired of seeing Chelsea (yes, Chelsea) win everything by 6 goals, and have no real competition other than the 3 teams within their “playing level.” I am not sure if this makes sense, but basically, what I am trying to say is that it is not fun to watch when you know what is “meant” to happen anyway; I shouldn’t be bored of 6 – 0 the second weekend in.

This goes into my second argument: leeway is afforded to bigger clubs. People want to see the big clubs do well and what people want to see, people will pay. So an over looked handball, foul, or offside is not uncommon. Now, this is not just a case of me being sour grapes; I can give you plenty of examples where this has been true—but I am too tired to find dates and times at this moment.

I am going to end this post here because I’ve had a long and tiring day, with and without soccer. I am sure I will come up with a better/more grammatically correct argument in the morning.