I Have Never Been So Proud to Be Swiss 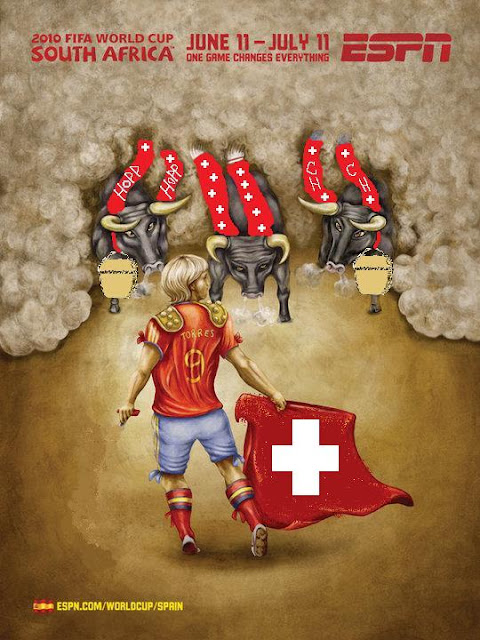 There are only 7,623,438 of us in the world (citizens, that is), and I think every single one of us waved a flag, rang a cowbell, or were less cynical for 30 seconds on Wednesday. My deepest apologise to Smelko and Colin who I embarrassed at the Grad Club, but my deepest thanks to them for not joining the Spanish supporters.

I am still too worked up about the game to discuss it in any intelligent manner, but I will attempt to do so in print because when I do it verbally, I end up sounding like a vuvuzela. I will try to do this slowly and rationally, but I cannot make any guarantees. Let's try this, by discussing what happened:


The Team
Of course, Frei being injured gave me flashbacks of the disastrous Euro08, but I quite liked the rest of the starting lineup. I think Benaglio is a fantastic keeper and the Swiss defense is unstoppable. People forget that the catennacio defense was invented in Switzerland and they forget that the Swiss did not concede a single goal last World Cup. In fact, according to a random person my brother retweeted on Twitter:

Now, don't get me wrong, their offence is slow and their strikers aren't the best (but not awful), but clearly, wasn't a problem for this game. With Hitzfeld as coach (fun fact: his first team was FC Zug!!!!!) , I think the boys will go far. Really.


Howard Webb
I was nervous to see Webb; on one hand I think he's fair and impartial, on the other hand, he is known for his harsh calls and being a card lover. Obviously the Spanish tried to take advantage of this by falling in the box every opportunity that they could. If you noticed, they didn't fall once in the second half because they realized Webb wasn't calling every little thing. So thanks Webb, for making me not hate English refs, like English hate Swiss refs (RE: Urs Meier-- http://www.swissinfo.ch/eng/British_tabloids_let_rip_on_Swiss_referee.html?cid=3967910)

The Spanish
Before I start hearing bullshit accusations like, “oh the Spanish were off their game, it was a fluke!” no, don't even try. Let's review the stats (you douche):


Shots on target: 8 - 3
Shots off target: 17 - 3
Possession (%): 63 - 37
Corner kicks: 12 - 3
Offsides: 3 - 1
Fouls: 9 - 17
Yellow cards: 0 - 4
Red cards: 0 – 0
Okay, the Spanish had more than double the shots on target compared to the Swiss, and 17 shots that could have been on target (compared to the 3 from the Swiss). Possession was 63% in favour of the Spanish, and they had 4 less cards* and 8 less fouls than the Swiss. They also had 4 times more chances at corners than the Swiss (though, admittedly, 2 more offsides). Now, stats do not mean anything in a game, I know that, but do not try to tell me that the Spanish weren't playing well! Or, even worse, weren't trying! So Torres was a bit rusty; if your great defense (um, to the argument of how the Spanish played, not the actual position) is based on one player, than you gotta be kidding me.

*Yes that's quite a few cards, but let's recap: Grichting's card was undeserved and should not have been a card at all, I can't remember Ziegler because I was still screaming/crying/hyperventilating from the goal, Benaglio's card was totally deserved (actually he was wasting time prior to that too, he just didn't get caught) and Yakin's handball, was a handball, but he was at least making the effort to pull his arm closer to his body.

But, I digress, I do not want to sound angry or bitter. On the contrary, look how thrilled I am: 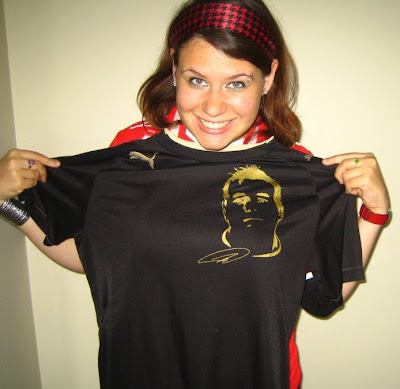 (Note the official Puma Alexander Frei jersey)
The game was brilliant; it showed how amazing soccer can truly be. Again, apologises to Smelko, Colin and the rest of the Grad Club for witnessing my behaviour, but I am not sorry about how I acted. In fact, if I had the mind to actually process what was going on at the time, I would have probably reacted more so. Also, thank you to everyone for their kind calls, sms, tweets, facebook messages and emails.

The follow is the euphoria I experienced the rest of that day (photographed kindly by Jason): 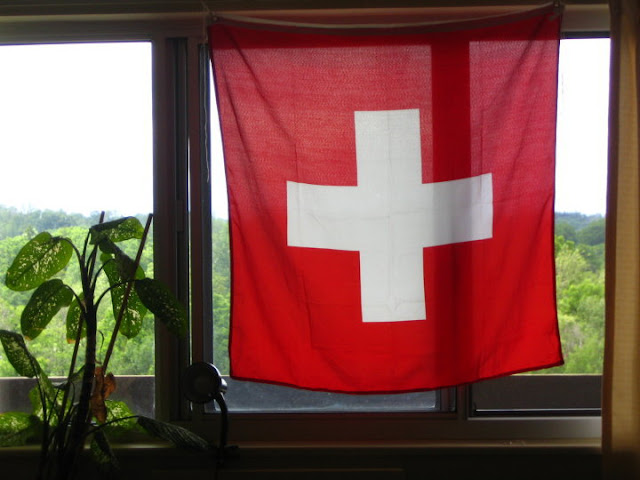 Such a lovely site to see! Once I finally stopped wearing it as a cape. 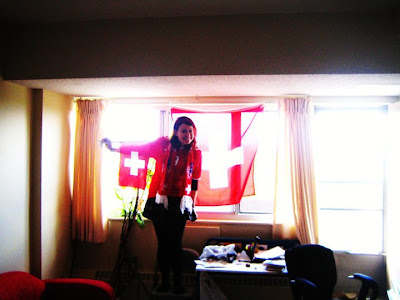 The come down still hasn't happened. 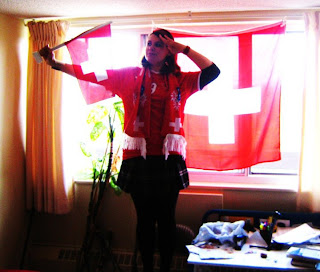 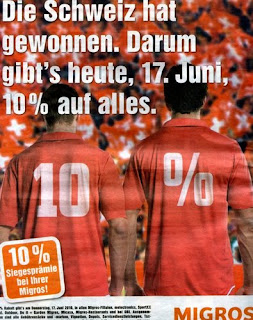 “Some of you may have already spotted this little gem on the oleole.com blogs, but apparently the marketing team at Swiss supermarket Migros ran a big, patriotic, advertising campaign before the Spain game, promising 10% off everything in store for one day if Switzerland won. The only problem being, they did win. Migros reckon the exercise has cost them CHF5m (£4.18m), though I'm betting that in reality the publicity generated and extra customers brought in have probably made it worth their while.” [Source: http://www.guardian.co.uk/football/2010/jun/18/world-cup-2010-live-blog]
Posted by Sonja Cori Missio at 02:00