Okay, I have come down a bit (but not really) from my previous post and now I attempt for a quick catch-up on all the games (that I was awake for).
You see, being a full time graduate students really cuts soccer watching. It's like the university doesn't have the right priorities.
Anyway, let's go by day (and, due to popular request, no more stats).
June 16, 2010
(aka quite possibly, without exaggeration, one of the greatest days of my life)
South Africa – Uruguay 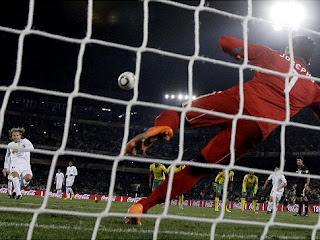 We start back in Group A again with South Africa – Uruguay. I am not going to lie, I had trouble focusing on this match; I was only rooting for the ref (Massimo Busacca, the reffing gem of Switzerland). Despite this, I don't think Khune's STRAIGHT RED was deserved. I think keepers should have a lot more leniency when it comes to what happens in the box. Was Khune a bit over zealous? Yes. Did he deserve a red? Of course not.
However, that being said, like his (best of the tournament so far) goal prior to the PK, Forlan managed to silence the vuvuzelas and it was Heaven. I'll get to more on the vuvuzelas in a later post. Anyway, I hate to see the host country lose 3-0, but all three goals were well deserved, and well played (even Pereira's with a man short).

June 17, 2010
Argentina -South Korea
After my over stimulated day on the 16th, I slept through this game entirely. I heard Messi played well though. I dunno. This picture of Maradona should suffice: 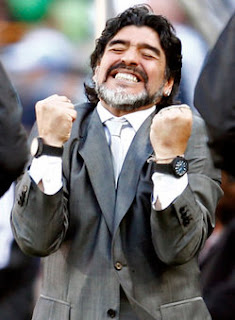 Greece – Nigeria
At first, I just had this game on in the background while I was getting ready for class. However, I soon became pretty glued to it. I wasn't expecting much from the Greeks, and while I know that Nigeria was playing with a man down (which was so stupid, what a shitty/idiotic was to get a red! Even though he did apologize and seemed really bad about it) the Greeks did impress me. I especially like how this upset the group as well; I have no guess at all who will be the second team for the Group of 16 (assuming Argentina does not completely mess up).
Mexico – France 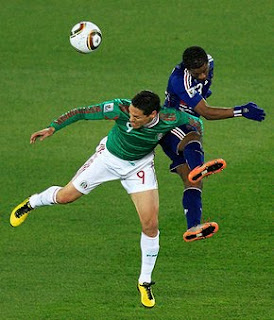 I don't know where to start with this game, okay, maybe here: France sucks. This is not even in support of my Irish friends, but rather, in my utter disappointment in the French National Team. Years ago in my undergrad, my first academic soccer essay was written on how the 1998 World Cup cured racism in France (obviously, tongue and cheek), so it's hard for me to see these soccer giants play so dismally. France was one of the first teams that I really remember watching (outside, of course, of the Italians), so to see what they have become is really a huge let down. And this is not due entirely to Raymond Domenech either; the team seems lazy, as if they are not putting the effort in. I mean, they did the same last World Cup (remember when they tied with the Swiss 0 -0 in the Group Stages?) and still made it to the Finals, but now, now it seems like the feel as if they have a sense of entitlement to just win. I know that their qualifications also cloud my judgement, but come on, at least try to give a damn.
This is by no means to imply that the Mexicans did not play well and have two great goals, they did. Sure, if memory serves me (which, it probably doesn't), I think the first goal may have actually been offside, but Blanco's PK was lovely (and possibly his last at a World Cup). The Mexicans deserved to win that, and I am very glad that they did.
June 18, 2010
Germany – Serbia
I really wanted to watch this with the guys at the Grad Club, but I couldn't get up in time. In fact, I got up 20 minutes late for the match and was royally confused as to why the fuck there were so many cards. I thought it was going to be a replay of Portugal – Netherlands 2006. Remember that game?! The score was 1 -0 Portugal but the cards went a little something like this:

Which equals, 16 yellow cars and 4 reds. While Alberto Undiano Mallenco of Spain did not go quite as far as Valentin Ivanov, his Russian counterpart, the Germany- Serbia game still  looked like this: 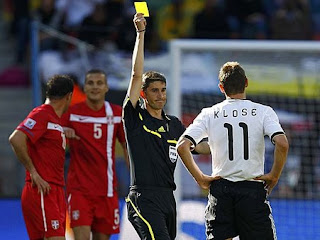 (Klose got two of those by the way).
Regardless, Serbia had an excellent goal I am glad to see them win. I am not too worried about how this will effect the Germans for the Round of 16 because I am sure that they will get by the goal difference. What does worry me is whenever Poldolski is sad. It breaks my heart.
Slovenia – USofA
I only watch parts of this game as I was at the train station for a good majority of it. I have no idea why they recalled the third American goal and I don't know what happened. Um... more to come later, I guess? In general, the game as a lot of this: 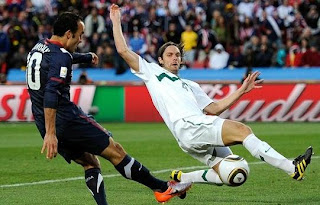 England - Algeria
All I can really say is, wow. The English played like shit and the Algerians played well. There's really nothing more to discuss. I have exhausted this topic to death already on both Facebook and Twitter, so let me say one final thing: The good thing about this game is that it made everyone forget about the German disaster in the morning. Actually, I think I can sum up this game with this: 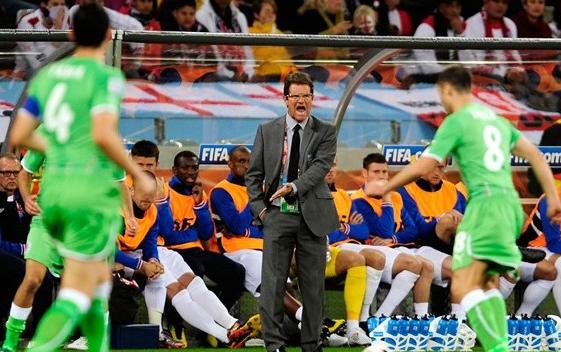