Super Hero for the Day

This is a few days old, but having only found out about it today, I still think it's totally worth sharing: 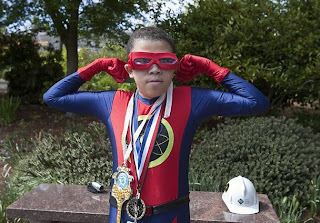 Local boy with cancer turns into a superhero for a day

Erik Martin, who is living with liver cancer, has always wanted to be a superhero. On Thursday, the regional chapter of the Make-A-Wish Foundation granted him that wish with an elaborate event that involved hundreds of volunteers in Bellevue and Seattle.
By Katherine Long
Seattle Times Eastside reporter

Thursday was shaping up to be just another school day for 13-year-old Erik Martin, but then something extraordinary happened: Spider-Man called.
Spider-Man happens to be one of the few people who knows that Erik, too, has a secret identity — he's Electron Boy, a superhero who fights the powers of evil with light.
And Spider-Man needed Erik's help. 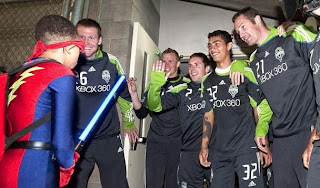 Erik, who is living with liver cancer, has always wanted to be a superhero. On Thursday, the regional chapter of the Make-A-Wish Foundation granted him that wish with an elaborate event that involved hundreds of volunteers in Bellevue and Seattle.
The local chapter, which serves four states, grants more than 300 wishes every year to children with life-threatening medical conditions, but only a few of them involve so many participants.
Pulling off a wish like this one required a big story, and a lot of heart. And so, with a note of panic in his voice, Spider-Man explained the dilemma: "Dr. Dark" and "Blackout Boy" had imprisoned the Seattle Sounders in a locker room at Qwest Field. Only Electron Boy could free them.
Erik got into his red-and-blue superhero costume, and called on the powers of Moonshine Maid, who owns a DeLorean sports car. For good measure, more than 20 motorcycle officers from the Bellevue Police Department and King County and Snohomish sheriff's offices escorted Electron Boy to Seattle.
"They shut down 405 — they shut down I-90," marveled Moonshine Maid, aka Misty Peterson. "I thought it would just be me, in the car." 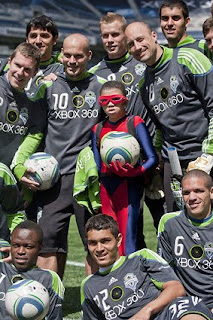 At Qwest Field, Electron Boy was directed by frantic fans to the Sounders locker room, where the entire team was shouting for help behind jammed doors. With a little help from Lightning Lad, the alter ego of local actor Rob Burgess, Erik opened the door with his lightning rod. The Sounders cheered.
"Thank you, Electron Boy," said defender Taylor Graham.
"You saved us!" exclaimed forward Nate Jaqua.
"Good job, big man," said defender Tyrone Marshall. And forward Steve Zakuani mutely bowed his thanks.
Electron Boy seemed a little dazed by his powers. Out on Qwest Field, the Sounders gave Erik a hero's congratulations, posed for pictures and gave him a jersey and autographed ball.
Everyone was startled when, overhead, the Jumbotron crackled to life.
"Electron Boy, I am Dr. Dark and this is Blackout Boy," sneered an evil voice, as the villain — Edgar Hansen, and his sidekick Jake Anderson, both of Discovery Channel's "Deadliest Catch" — taunted the young superhero. "We are here to take over Seattle and make it dark!"
On the Jumbotron, a video showed a Puget Sound Electric employee Jim Hutchinson trapped in the top of his bucket truck in front of PSE's Bellevue headquarters. Only Electron Boy could save him.
As Electron Boy's motorcade — the DeLorean, the 25 motorcycle officers and a white limo — rolled through downtown Bellevue, pedestrians stopped in their tracks and pulled out their cameras to take pictures. Clearly, somebody famous was in town. But who could it be?
"It's Electron Boy," Erik's older sister, Charlotte Foote, shouted out the window of the limousine.
More than 250 PSE employees gathered outside the company's headquarters and cheered as Electron Boy freed the trapped worker. "It was so loud, people in office buildings were looking out the window," said Make-A-Wish communications director Jeannette Tarcha.
But Dr. Dark and Blackout Boy were still at large. Electron Boy got a tip that the evil duo were at the Space Needle, where they had disabled the elevator and trapped people on the observation deck. Racing back to Seattle, Electron Boy stepped out of the DeLorean to a cheering crowd of dozens of admirers, and confronted his nemesis.
"How did you find us, Electron Boy?" Dr. Dark demanded.
Erik wordlessly leapt at Dr. Dark with his lightning rod, freezing the villain. Then he unlocked the elevator and freed the people trapped upstairs.
Bellevue police Officer Curtis McIvor snapped handcuffs on Dr. Dark and Blackout Boy, who couldn't resist some last words: "How can we thank you for saving our souls?"
A tiny smile played around Electron Boy's mouth. Just for good measure, he held his lightning sword to Blackout Boy's throat again. The crowd went wild. "Hip-hip, hooray!" 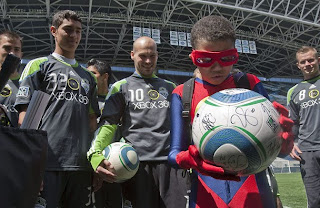 Seattle City Councilwoman Sally Bagshaw stepped forward with a key to the city and a proclamation that Thursday was Electron Boy Day. Afterward, Erik posed for the TV cameras, flexed his muscles and spent some time astride a Bellevue police motorcycle.
"He's over the moon," said Foote. "This is definitely beyond anything we thought it would be."
Watching her son run across the plaza in front of the Space Needle, mom Judy Martin said Erik goes to school when he's able, but is often too tired. "He hasn't had this much energy in a long time," she said. "They called it the power of the wish, and they're right."
Like any good superhero, Electron Boy kept his innermost thoughts to himself. But he did have one important thing to say:
"This is the best day of my life."


I love this and I am not even particularly sentimental. The point is this: this kid is fucking awesome.