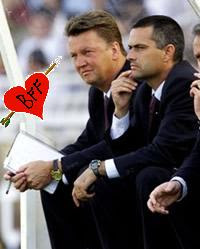 So, what is at stake today, in a less than 15 minutes? I mean, besides holding up the Cup. Well, as you know van Gaal took Jose under his wing in the late 90s at Barca, however there is more to this game than outschooling each other.
Coach Matchup
First, both coaches will be playing for their second CL win. Van Gaal won in 1995 with Ajax and Jose won in 2004 with Porto. Both of these wins were for clubs in their home countries. Now, they’re trying to win for (what can be considered) clubs in rival countries (van Gaal, a Dutchman, with Germany’s Bayern and Jose, a Portuguese with Italy’s Inter).  Both coaches also have deserved bragging rights if they do win. Both struggled with shocking losses throughout the tournament, (NB: Bayern shouldn’t even be here at all. It should be Fiorentina) and they both will have great soundbites and quotable phrases if they win.
Team Matchup
Second, both teams are on almost on par (on paper). They’re both playing for the treble, having won both their leagues and their league cups. Bayern may have won CL more times than Inter (Bayern once with Ottmar Hitzfeld, the current Swiss national team), but both have won consecutively (Bayern in 1974, 1975 and 1976, and 2001 with Hitzy. Inter in 1964 and 1965). Both teams have a smorgasbord of International players preparing for the World Cup and both teams have both extreme love, and extreme hatred, among soccer fans.
So, what does that mean for today? Well, for starters, one helluva match. While I love Jose, and I really do think Inter will win, Bayern should not be written off. In all truth, I think Inter will score in the first 20 minutes, Bayern will get the equalizer just before the half and Inter will get a late (possibly undeserved) goal during stoppage time in the second half. 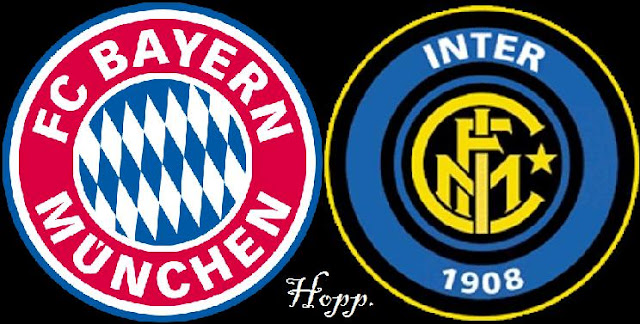 Or it will go to a shootout.
Anyway, game on soon.
FORZA NERAZZURRI.
Hopp,
scm.
Posted by Sonja Cori Missio at 14:34