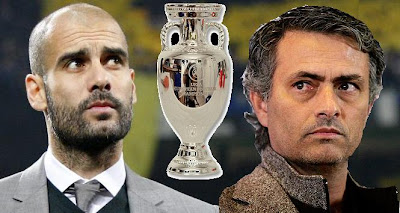 Without any exaggeration (none, at all), Jose Mourinho is the best. Let’s consider the stats from today’s game:

Barca was playing at home with nearly a full roster (sans Puyol); there was no reason for them not to get the two goals—I mean, Messi is able to do it himself, right? Wrong. That was their mistake: relying on their offense instead of realizing Inter’s defense. I know, they had to score, fair enough, but they could not do it in the same way they did with Arsenal.

Arsenal was so amazed by Messi, he was able to just waltzed right through them (this is by no means to undermine Messi’s talent, part of that talent is the waltz), however Inter cannot be played the same way. In fact, one of the biggest mistakes that Pep made was subbing Ibrah off (interesting side note on Barca, did you know that Pep is only 39?) The only chance Barca was going to get to score was with a header from a corner, sending Ibrah off and replacing him with Krkic (who makes Messi look like a giant, by the way), was a poor decision. When he missed his shot, that was game over.

Ibrah wasn’t their only mistake though, like I have been saying, they took Inter for granted. Inter has, undeniably, the best defense right now in UEFA and, even/despite a man short they outshone Barca (well, not by much and not on paper). Inter wasn’t looking to win the game, they just wanted to win on the aggregate. Say what you want about Jose, but he is not a greedy, selfish or stupid man. He knew it would be better to lose the match in order to win the title (lose the battle, win the war etc). I am surprised he didn’t sub off Sneijder sooner. This all being said though, Pique’s goal was beautiful.

Of course this is utter bullshit. Barca just plain sucks (NB: I [irrationally] hate Barca and I think nothing that they do is right).

Seriously, they do nothing the whole match other than running around like goons to tire the other side out, enabling them to make an amazing goal.

I rather watch a game than a finisher, you know? Inter may have played the whole game defensively today, but they’re not going to do the same against Bayern. Especially now that Ribéry has been banned from the final.

Oh who am I kidding? Inter has already won the title.