Note: I never say "football," but I can never pass up on alliteration.

Here’s a little fact you may not know about me: my career, my profession, my 9 -5, is in philanthropy.

I work in a Foundation where my main goal is to help raise money through research. Obviously, it’s a bit more complicated than that, but, essentially, that’s what I do.

Recently, I have become more fascinated with how social media and philanthropy can work together. I am sure you all have seen “for every like, I will donate X amount” or something similar. While there’s a ton of literature and debate around social giving (if you have time, I strongly recommend you check out Slavoj Zizek’s ethical implications of charitable giving, here), I personally don’t believe charity inherently evil.

Oh sure, people may use charity for evil, but I think for the most part, people mean to “do good.”

Which brings me to the point of this post. I have used my blog and Twitter before to see how I can reach people through philanthropy (see: 90 Minutes of Fundraising) and a few days ago I decided to take on a new “experiment” so to speak.

Having hovered just under 1,000 followers for a while now, I decided to mark my 1,000th follower milestone with a donation to The Homeless World Cup: (Thanks for the RT's)

Mike Shoemaker from Umbro Canada saw my tweet and also gave his support with the following promise: 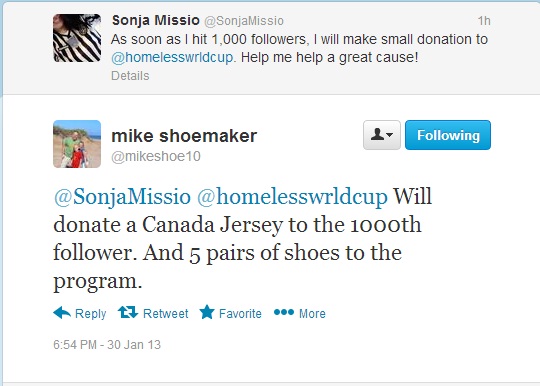 (Thank you so much Umbro Canada!)

The response and support have been great so far, and not just because I have gained followers. Rather, it is because a simple promise of a small donation has raised awareness for a great organization.

Believe it or not, this isn’t about me. I have donated to The Homeless World Cup previously and it’s an organization I want to support. I figure (maybe arrogantly so) I’d hit 1,000 followers sooner or later, this is just my way of commemorating the occasion.

However, like I said, not everyone agrees with this method, and that is 100 per cent legitimate. As one person said (and, rightfully so, they are entitled to their own opinion, “holding donations hostage for more Twitter followers is a pretty scummy thing to do” (I’m withholding the handle, as this is not a personal attack), but that is not my goal.

Trust me, I have done enough “silent philanthropy” that I do not feel like this is some sort of self-congratulatory, narcissistic ploy. The reason why I am doing this is because I think it would be a great way to promote something that I find important.

I also think that it might encourage other people to become familiar with the Homeless World Cup, something that they may not have realized existed before.

I found out about it through Jerrad Peters' book We Call It Soccer, and recently, I was made aware of Dave Bidini’s book Home and Away (he recently sent me this great Globe and Mail article about it). This is the least I can do to endorse something I find downright cool and worth sharing information on.

And while I know my followers are use to my regular tweets about Toronto FC, Udinese, and the occasional pun, sometimes I want to share a little more extraordinary.