… *clap clap clap*
It’s no secret that I hate hockey. But really, it’s more that I hate the Maple Leafs.
You see, my thoughts when it comes to TML is the visual that everyone hates: the sushi wearing suits one. In high school, when someone said they were going to the Leafs game that night, they’d be picked up in their daddy’s Ferrari and whizzed away to a three period 5 star hotel. To eat sushi and wear a suit.
Okay, that’s an exaggeration, sometimes they’d be picked up in their daddy’s Mercedes, BMW, or Porche or they’d drive their own Lexus.
Now, don’t get me wrong, I am not going into a class-struggle-1%-I-hated-high-school-etc post. The truth is, I loved high school. I had a great time and I look back at it fondly (and not in an “Underage Drinking: A National Problem,” ala It’s Always Sunny kind of way). In fact, it’s because of high school I am going to this game tonight.
But I am getting ahead of myself.
See, because I had no hockey-at-home influences, I naturally assumed hockey (re: TML) was just another act of money. Which was fine, but just not my thing. So, I grew ignoring hockey (re: TML) because in my mind, it was just another level on a pissing contest.
Also, Tie Domi use to live by me and he was a totally mean to me once.
Don’t get me wrong, other sports—soccer included—has the same problems (except no one has been mean to me, I think), but I didn’t grow up with it the same way I did with hockey (re: TML). Hockey (re: TML) tickets, unless you have a daddy who loves hockey (re: sushi and suits), are pretty mythical as a kid. Sure, I could have watched it at home, but no one household did. Instead, (keeps in mind, this is pre-TFC days) I went to $11 Sprite Zone Toronto Raptors games. And I went to plenty.
Anyway, back to why I am going tonight. It’s Matt's (my bestie from high school, see? Full circle!) 25th birthday so I got him tickets as a present. Now, Matt knows how much I dislike hockey (re: TML) so he’s humouring me by letting me go like this to the game: 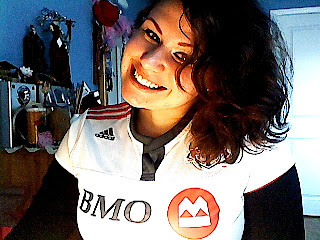 (I wasn’t allowed the red one because they play the Senators tonight. Also, I don't know why my webcam keeps making me look psychotic. And that I have a mustache. Oh well, happy Movember!)
But, truthfully, I think I will enjoy it. I do like sports, for the most part (I wasn’t kidding about the Raptors; in the late 90s, early 00s, like everyone else, I was a huge Raptors fan. I also played a lot. I even taught myself how to shoot like Doug Christie). So I am not too worried about having fun tonight. Plus Matt is a grand old guy who will allow me to yell “THIS IS OUR HOUSE” at the top of my lungs. Well, I better like it because I am also getting the decent and likable Jerrad Peters TML tickets for Christmas. He’s already requested that I go like this. Weirdo.: 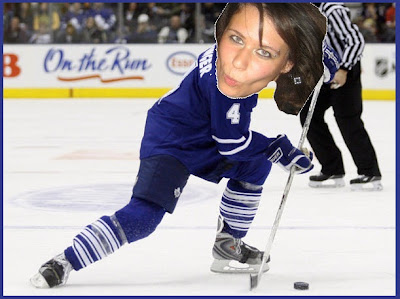 Just kidding! I don’t know how to skate!
Anyway, wish me luck tonight. And if you’re at the game, come by and say hi. I’ll be sitting in the standing-room-no-alcohol-partially-obstructed section.
Can’t wait!
Hopp,
scm.
Post script: It’s also my big brother’s birthday today. HAPPY BIRTHDAY ERIK!
Post post script: I know too many Scorpios.
Post post post script: download the first issue of Where the Owl Sleeps: www.wheretheowlsleeps.com
Posted by Sonja Cori Missio at 14:53