This will be short and sweet, I just need to write something. I know this is a soccer blog but, for those of you who don’t know, I’m an NDP’er. Have been since I was a teen, since I was able to vote. Today was—to say the least—surreal.
I don’t want to go on about what an amazing guy Jack was and all the great things he did for the NDP and for Canada. You know all of that already. And if you don’t, I won’t be able to convince you otherwise. I only had the pleasure of meeting Mr. Layton a couple of times, but every time I did, he was warm, friendly, and, if we’re being honest, a bit of a riot. He was always fun to talk to, and would give more than just a few minutes of his time. He once even excused himself from a conversation just to shake my hand. I blushed.
It was less than two weeks ago that I was riding the GO with Nik Spohr (to a TFC game, mind you) discussing the future of the NDP. During the entire conversation, neither one of us once considered a future without Mr. Layton. And now that future has come when it (to quote Nik) “wasn’t in the script,” it leads to the question: where do we go from here?
I don’t know. But, as awesome as ever, Jack left us with a few starting points:
“[…] My friends, love is better than anger. Hope is better than fear. Optimism is better than despair. So let us be loving, hopeful and optimistic. And we’ll change the world.


All my very best,
Jack Layton"
And Jack certainly did do his very best. So let’s do ours. This is not a recruiting post for you to join the NDP (but, if you do, that’s cool too), but rather, one for you to consider his words. Even if you have different politically ideologies, there has to be something in his letter (in full here: http://www.cbc.ca/m/rich/politics/story/2011/08/22/pol-layton-last-letter.html) that resonates with you. Take that, and do something with it.
Remember, this can happen: 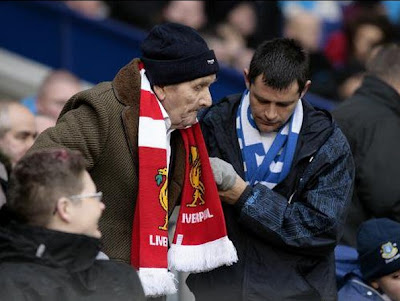 (See? Still soccer related).
Today, for the first time in a while I went into my childhood bedroom and on the wall, next to the pictures of the Spice Girls and Erik’s Penny Paper®, was this: 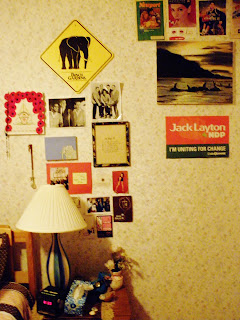 And, sitting on my desk were these: 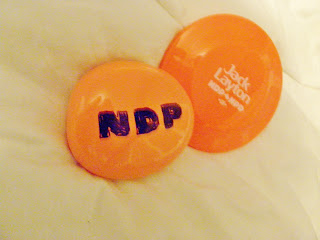 (A Jack Layton Frisbee and, how metaphorically appropriate, an NDP rock).
All three made me smile, not just because of the party, but because of the man who stood behind the party.  A man, who had the patients and the good humour for this: 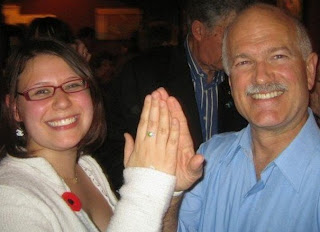 (Possibly the worst picture of me ever, but, honestly who cares?)
And of course, with Mr. Nik Spohr: 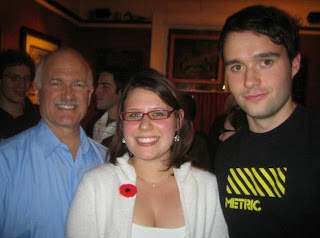 (Nik, if you remember, Jack specifically requested you come into the picture, right after I introduced you as, "the future NDP Prime Minister")
So while I am sad, and while my thoughts are with Olivia, his children, and those close to him, I’m glad he left us with something much more than just his legacy. Mr. Layton left us with hope and courage and his confidence that we can continue to do what he had worked so hard to do.
To sum up: thank you Mr. Layton.
Hopp,
scm
Post script: Love > Anger. Hope > Fear. Optimism > Despair.