Now to the Actual Game!

My first game this season was full of bright sunshine, warm weather, and one of the most thoughtful gestures I have ever experienced (note: see previous post). But several hours before it was in a disarray of disaster (can you disarray disaster?). My doctor’s appointment ran late so I was worried that I wouldn’t be home to meet a certain Mr. Rossi who was so kind to sell me his tickets for today (however that worked out just fine). Calm now that I had my ticket, I began eating a leisurely lunch when I noticed on the ticket that the game started at 13h00, not at 14h00 like it said online. That meant, in order to take the once-an-hour Go train I had to drop everything an leave NOW. I scrambled to collect my stuff, but I couldn’t find my jersey (it was under a pile of clothes, of course) and make it to the train on time. I called for my dad to take me to the station, but he had just left to help the neighbour with something. So my mum step in and drove me with minutes to spare. I get there and the plat form was packed (and the train was late!) Dozens of people were lined up to go to both the TFC game and the baseball game. When the train finally arrived, it was fuller than it is at rush hour.
I am now worried because I am running later than expected and my pre-drink meeting plans had to be scrapped (err, rescheduled. Weather permitting). Then, I get a phone call from Jason saying he’s gotten on the wrong streetcar and he’s God knows where (eventually he made it and we end up at opposite ends of the stadium unable to find each other. “GATE FIVE!”). We scramble and make it to our seats (after I eat my pulled pork… in 3 minutes!) just seconds before the national anthems.
We’ve barely rearranged our coats and bags when the score is 0 – 1.
But that’s okay. Because despite the delays, the wrong TTC, and the now eaten-to-fast sandwich in my tummy, I am bouncing with excitement (literally, Jason tells me to stop because it’s disturbing). I’m here, and despite the early goal, we’re now playing better. There’s lots of chances and Frei is now unstoppable. We hit the post and a goal is called back for being offside. But in the end, it doesn’t really matter because you can see the team is playing with a new spark, something that will continue to improve at a steady rate. Like the opposite of the Raptors; instead of losing everything in the 3rd, TFC seems to be gaining momentum as the game goes on. And, in the mist of all this excitement, I get a tweet from someone who I’ve enjoy following on Twitter and missed meeting a week ago. I rush down to meet “a suit on field level” and I am presented with this: 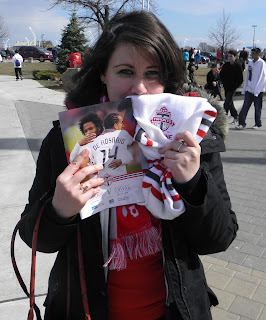 I am ecstatic! And I wear the scarf for the rest of the day: 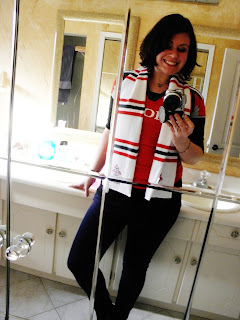 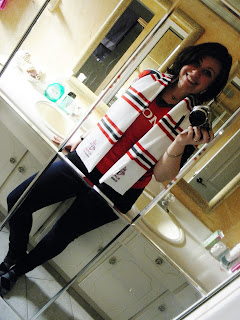 All-in-all, regardless of the little hiccups at the beginning, this is the best game day I have ever experienced.
This picture pretty sums up the whole experience. I just wanted a nice photo of the stadium and the photo gets ruined by a photobomb. A photobomb of a rainbow: 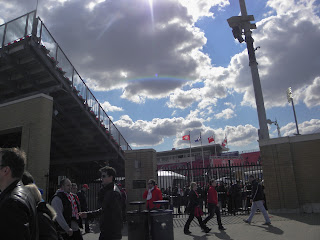