So I have come back to my blog. Now, I realize, if you're going to have a soccer blog, the World Cup is probably the best time to do it. And that, if you have a soccer blog, you probably shouldn't randomly disappear from it for the majority of the tournament. But really, I think you should.

Here it is, and I don't care if it makes me sound like an asshole: You have all these jackasses who like soccer for about 2 and a half weeks (let's face it, they don't watch the Group Stage) who jump on the bandwagon as quickly as they jump off. They clog up the bars, talk during the games, and are generally really annoying. Honestly, sometimes I like soccer the least during the WC. So, basically I went on a, um, sabbatical (sure, why not?) for that period of time, and now that soccer is unpopular again (in North America), I'm back!

Also, my absence had nothing to do with the Swiss not winning. That's purely coincidental.

Hey, speaking about the Swiss, so that Young Boys - Spurs match up? Well, that's pretty much balls.

Actually, I'll be honest, I hope YBs kick the crap out of the Spurs. I mean, for beyond the obvious reasons. England having a million teams in CL is lame, boring, and predictable. I would like to see a smaller team at least have the chance to compete (and not pull an FC Zurich). I realize that that's what Europa is for, but, it would still be nice if there wasn't just English, Italian German and Spanish teams in CL.

Of course, I know this will not happen. Especially with Alain Baumann's vote of confidence: "It's the hardest draw, Tottenham is more difficult than Fenerbahce for us. We are very happy to play in the Europa League, if we lose to Tottenham. If we win, we are in the group phase. That's what we hope, but the chance is very, very little. Can we win? At the moment no, I don't think so."

Speaking of winners, I have another new problem with Jose being at Madrid. My God, he looks awful in white: 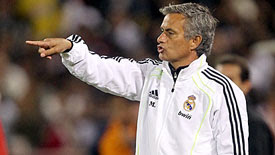 Until soon. I promise.