hihi. Okay, let’s get down to business. I know I have been slacking as of late, but now it’s crunch time. I have taken off my watch, cuff and rings and am sitting down to do some serious writing. Instead of one giant post as originally planned, I will do a couple of smaller ones… that way it looks like I have accomplished more.
Go me!
Let’s start with Serie A.
Saturday: Lazio – Udinese
While I may have put in my two cents about Isla being a fucking idiot, let’s look at the game overall. Starting with…
Di Natale 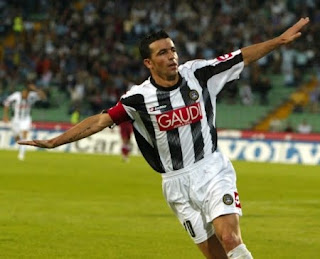 I have a love-hate relationship with Di Natale. While I think he is great/amazing/looks awesome in man panties, he is also utterly frustrating to watch. For example, the boy is the top scorer for Serie A with 29 goals (Diego Milito a far second with 22), but could you imagine how many he would have had if he ever bothered to chased after the ball? I like him, but I am not sure how much heart he has. He’s just not the same type of hard working player as, let’s say, Rooney, Drogs or even Ibrah; if he can, he’ll do it, but if the conditions aren’t perfect, he won’t readjust himself. Though, having said that, I am not sure if it was sweet—or completely idiotic—for him to pass to Sanchez in the 64th minute, when the two of them were up alone (on a break from Di Natale). He would have hit the 30 goal mark if he had taken the shot (and, you know, not have lost so badly), but making way for Sanchez was kind of nice (and stupid). Moving on, to whom (Jason?) I think is that man of the match…
Rafael Romo
Let’s take a look at Little Romo’s stats:
DoB: February 25, 1990
Height:            6' 6
Age: 20
Position: GK
Number: 1 (you betcha!)
Nationality: Venezuelan 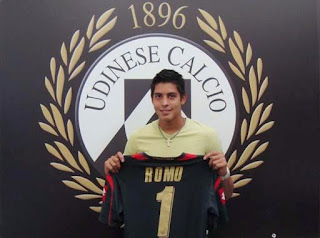 Alright, so he let a few goals in (though, not all were his fault), but, more importantly, he made SEVEN saves. This is Romo’s first appearance for Udinese and first for Serie A, and the little champ was wonderful. I mean, the score (3 -1 for Lazio) may not reflect it, but the little bugger is decent. Don’t get me wrong, I still think Handanovič is awesome, but Romo is someone to look out for, and you read it here, first.
Moving on to the other games this week…
Sunday: Siena – Inter 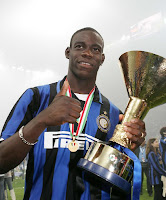 Good Lord, I nearly had a heart attack during this game. What I like about Serie A is that little(r) clubs have the ability to defeat giants (kinda like the FA Cup, all the time). I mean, it never reflects in the table of course, but single matches prove differently. Anyway, after what actually look like a replay for the Chelsea during the FA Cup (ie all post/crossbar, all the time), Milito was able to pull Inter ahead with a goal in the 57th minute. However, the man of the match for me in this game? Mario Balotelli. Stats:
DoB: August 12, 1990
Height: 6' 2
Age: 19
Position: Forward
Number: 45
Nationality: Italian
He’s another guy you should be watching out for. I know Italy has a policy against letting young players play, but by the time Euro12 comes along, or WC14, he will be in prime shape for the national team.
But, getting back to Inter. Congratulations on their 18th Serie A title, winning the Coppa and soon to win CL (first time since 1965!) Love him or hate him, you have to admit: Jose is the best.
Very nice.
Hopp,
scm.
Post script: final table if anyone is interested: 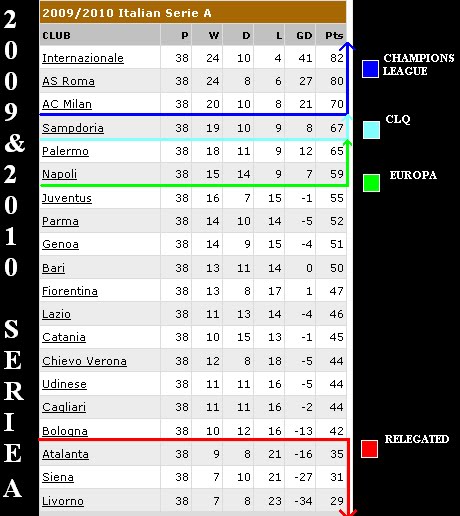