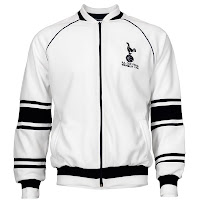 Preface: Yes, that is the  1981 FA Cup retro zipup. I'm both hilarious AND cruel.
There is some misconception that I want to clear up: I don’t particularly like English soccer/the EPL. I find their long balls (snicker) boring and while you can’t deny their talent, it doesn’t quite live up to the pasión that you see with the Italians, Spanish and even Germans (both club and country-wise). This could be because EPL teams (seem) to have more National players playing for them than other leagues (I’m looking at you Juve!) or, it could be because I just don’t like the English so I am picking on them. I dunno.
Soooooo, why do I like Chelsea? Well! I am glad you asked! I started liking the Blues when we had a free subscription to Setanta and I started to watch a helluva lot more English soccer. I decided to pick an English team so their long balls (snicker) weren’t as boring. I went with Chelsea for two reasons:
1.      José Mourinho.
2.      Chelsea Blue looks awesome on me (whereas, red does not).
Anyway, I am glad we straighten that out: I don’t like the English, I tolerate them. (I realize a lot of my readers are English, but you must realize I like fighting words).
So this brings me to the Spurs. The reason why I am writing about them is because of their current EPL position (Yeah I don’t like the English, but I like tables and standings of all kinds. I think it’s because I’m Swiss). The struggle between the Spurs and Man City right now is fascinating. Now, while “Man City Blue” may not be my favourite colour (bonus points if you get the reference! Seriously, do you?), I do like Tevez. An awful lot. I also like Mancini an awful lot (even if Tevez does not).  Um, I am not sure if I have ever blogged a post that doesn’t somehow relate to Inter. ANYWAY, fourth place, how exciting! Who cares about the EPL when there’s European Cups to discuss?! I want to say I am supporting the Spurs, but really, it’s a battle that I am looking forward to. I mean, sure I am interested in the Chelsea – Man U race as well, but as the picture states, Fourth is the New First. [T-shirt can be purchased at www.whoareyadesigns.com I strongly suggest that you check them out, they’re clever].
I think, deep down, I am pulling for the Spurs for only one reason: to see Peter Crouch dance.
Hopp,
scm.
Post Script: just in case they lose and you want to see Peter Crouch dance: http://www.youtube.com/watch?v=mVBGrl239KY&feature=related The best bit is when he totally denies Joey Cole.
Posted by Sonja Cori Missio at 19:22